Sam Gilmer provided the motivating force, vision and leadership toward the founding of SGMP in 1981. The award is presented in recognition of service over a period of time, especially at the national level, that has significantly contributed to the Society’s growth and development and enhanced the professionalism of the industry. SGMP members nominate potential recipients who are then selected by a panel of former Sam Gilmer Award winners.

Sam Gilmer Planner of the Year 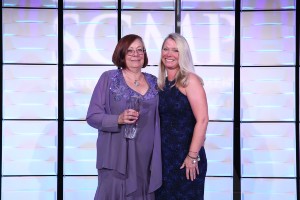 Planner of the Year, Chele Clark, CGMP, is currently serving as SGMP’s Gilmer Institute of Learning Trustee for scholarships and certification and works at the Colorado Department of Law, Attorney General’s Office in Denver, Colorado. “Paying it forward by mentoring others is what Chele Clark does!” her nominator wrote. “Since joining SGMP, Chele has stepped out of her comfort zone and developed into a strong leader who leads by example and encourages others to not settle for good enough but to achieve their highest potential.”

She has continually served SGMP locally and nationally encouraging government meeting planners and suppliers in her orbit to keep learning, to volunteer and to connect with one another to advance their careers. At the national level, she has served as a Gilmer Institute of Learning Trustee since 2016 and on various national committees, receiving the President’s Award in 2015.

Sam Gilmer Supplier of the Year

Supplier of the Year, Bobbi Barkley, CMP, CGMP, CFMP, is senior sales manager for the Double Tree by Hilton Seattle Airport and Hilton Seattle Airport & Conference Center. Passionate for creating professional education for government meeting professionals, she is currently serving her second term on the national SGMP Gilmer Institute of Learning as a trustee where she took on the task of upgrading the National Education Conference (NEC) scholarship process and oversaw the revision of the Certified Government Meeting Professional (CGMP) examination. “Bobbi is the kind of member you wish every member could be—active, involved, willing to serve, willing to share, WONDERFUL!” wrotte her nominator. “Education is her passion and Bobbi has worked hard to make sure she is well educated in all aspects of the industry—always learning, always teaching, always mentoring.”

Bobbi Barkley has served in multiple roles for the SGMP Pacific Northwest Chapter, including as second vice president (2013-2016) and chapter treasurer (2011-2013). Her work as chapter second vice president involved setting educational programs for the chapter which culminated in national recognition for “Programing of the Year” four years in a row (2013-2016). She also received national awards for her terms as treasurer (2012, 2013). For her efforts, she was honored with the SGMP Pacific Northwest Chapter Supplier of the Year (2012) and the Pacific Northwest Chapter Red and Peggy Meyer Award for Leadership Excellence twice (2013, 2016).

Michelle Fink, CGMP, and Tecumseh Deloney, CGMP, CMP, were both presented the 2019 President’s Award by SGMP National President Michelle Milligan, CGMP. Michelle Fink is a government meeting planner for the Arizona Department of Transportation and a past president for the SGMP Arizona Chapter. She was recognized for her work with membership recruitment and chapter development. Tecumseh Deloney, CGMP, CMP, is a contract planner for ZERO TO THREE and the current secretary of the SGMP National Board. She was recognized for continuing to move SGMP into the future and for taking the lead on SGMP’s National Education Conference for the last three years, the group’s largest annual event. 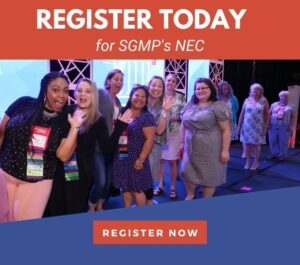